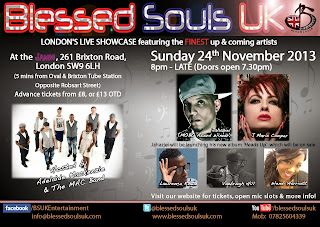 Blessed Souls is one of London’s best live music showcases for home grown talent with a soulful flavour. Now in it’s 6th year, the event returned last week with yet another great line up.

The music began with host and vocalist ADELAIDE MACKENZIE getting things underway by introducing and performing with resident house musicians, The Mac Band.

First up on stage was SOPHIA BEN-YOUSEF. Billed as the night’s ‘One Too Watch’, the stunning 17 year old had traveled down from her home in Liverpool especially to appear on the night. Performing two of her own compositions ‘Carry On’ & ‘I’ll Be True’, the singer/songwriter & multi-instrumentalist displayed a talent and maturity beyond her years as belted out the tracks and also played keys beautifully.

Following on from Sophia was another young star in the making. LAWRENCE ROWE has already achieved much in his first (almost) 21 years. The Brit School graduate is not only a vocalist with one of the UK’s best know ensembles, the London Community Gospel Choir and has appeared at the National Theatre, but also writes and performs as a solo artist in his own right. Showcasing self penned material, including some taken from his forthcoming ’19 Expressions EP: Vol 1’ Lawrence took command of the stage throughout his set even selflessly offering his backing singers their own moment in the spotlight.

Next to hit the stage was a lady with a soul pedigree. WENDI HARRIOTT, herself also a product of the Brit School, has lent her backing vocals to some big names in the business including Emeli Sandé, John Legend & Rebecca Ferguson and recently sang with rock superstars The Killers at the MTV Europe awards. However tonight she stepped out of the shadows to perform two songs, firstly a cover of the Rufus and Chaka Khan classic ‘Tell Me Something Good’ and then a touching self penned ballad entitled ‘Come Too Far’ which she dedicated to her daughter who had recently been seriously ill and was recovering from an operation. No surprise then that this song was emotionally driven and the performance left not only Wendi but much of the audience with a tear in their eye.

BBC TV’s The Voice has brought many vocalists to our attention over the last couple of years. None more so than our next guest performer. J MARIE COOPER, instantly recognizable with her fiery red hair, blasted on the stage and proceeded to belt out a selection of tunes. These included three of her own compositions, including the touching ‘Never Too Late’ and the belting ‘Closure’ plus an amazing mash-up of Destiny’s Child’s Survivor mixed with Mary Mary’s Shackles. Despite having a bit of a sore throat she still managed to hit every note perfectly and blew the house down.

After her full performance, J Marie was also joined back on stage by Adelaide for a amazing duet on Kings Of Leon's modern rock classic 'Use Somebody' which they cleverly switched up halfway through and taking the track on a reggae tip that had everybody enthralled.


With Vanbrugh Hill unfortunately unable to attend there was a late addition to the bill. Enter MICHELLE JOHN, a girl from South East London with yet another outstanding vocal ability. Providing one of the highlights of the night she launched into an impromptu version of the Sam Cooke classic ‘A Change Is Gonna Come’ but switching up the lyrics to a slightly more personalized version. On hearing the first line was ‘I was born in Peckham.....’ you get the general idea.  The unique cover was followed by one of Michelle’s own compositions. ‘Priceless’ deals with her own experiences of an abusive relationship and the emotions clearly ran high once again during this delivery of the song.

Finally gracing the stage was MOBO Award winner JAHAZIEL. The rapper draws on a variety of styles for his music, which mixes traditional hip-hop with reggae, soul, R&B and even gospel. Performing a selections of tracks, some taken from his new album ‘Heads Up’ Jahaziel lyrically takes inspiration from personal experiences as well as having a spiritual edge to his songs.

Adelaide Mackenzie and The Mac Band (who did an fantastic job backing every artists on stage) brought proceedings to a close with another incredible jam session before bidding everyone goodnight.

Blessed Souls will return on February 15th 2014 at The Bedford in Balham and, if tonight’s show was anything to go by,  there’s no doubt the line up will be as hot as ever.