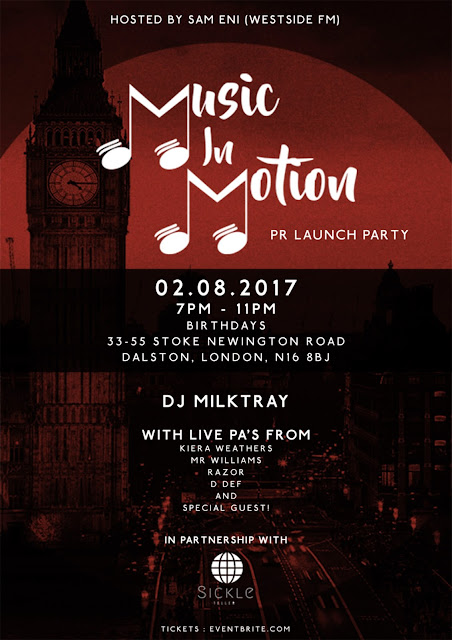 Wednesday 2nd August sees the official launch Music In Motion PR, a night showcasing some the new talent signed to their rosta.

Performances on the night will come from former X Factor star KIERA WEATHERS, US R&B artist MR WILLIAMS plus rappers RAZOR and D DEF with as well as some surprise special guests, with tunes provided by DJ MILKTRAY from On Top FM.

Early bird tickets are available now for only £5 from https://musicinmotionprlaunch.eventbrite.com
or £10 at the door on the night
By JUMPINSOUNDS at July 18, 2017 No comments: 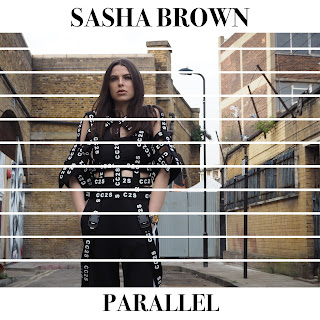 'Parallel' is the new single from all-round renaissance woman SASHA BROWN.
Not content with being a formidable multi genre singer/song writer, the Londoner also regularly performs in the capital and around the UK when she is can caught playing a mean sax and if that wasn't enough still finds the time to present her own show for station HOXTON RADIO.
The keen eared amongst you might have heard her on last year's ‘Talk On’ a track she featured on by NATHAN BARATO, which remained in the Techno Top 40 for over 10 weeks and gained support from the likes of Radio One’s legendary PETE TONG and the dudes over at Rinse FM.
However her new release couldn't be more different. Essentially a big beat ballad, the track lyrically explores a relationship between a seemingly perfect couple that should work well together but just can't connect.

Look out too for the video coming very soon. Filmed in Shoreditch, it's a music-fashion fusion between Sasha and upcoming fashion designer, Charli Cohen, who has been featured in the likes of Vogue.
For more info visit