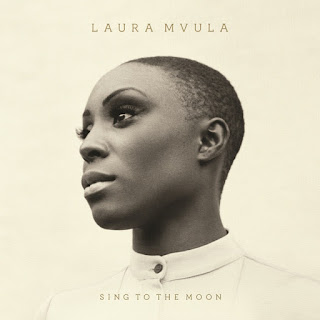 In the last few years the music industry has become a haven for UK female artists doing their own thing in their own way. With AMY WINEHOUSE as a role model, ADELE carried the torch on to the likes of EMELI SANDÉ who have proved that a sound that may not instantly appear mainstream can become just that.

LAURA MVULA fits nicely onto that list and has relatively quickly become one of THE names of the lips of those in the know......providing they can pronounce her name properly *it's Ma-Voo-La.

The Birmingham songstress made the higher reaches of most 'tips for 2013' polls, being narrowly beaten to the top but gaining more than a little recognition along the way. However, until now, many have yet to actually hear much of her music.

So finally her debut album is here, on the back of just two previous single, 'She' and 'Green Garden'. Both releases have gained a fair amount of airplay with little promotion (as well a few high profile fans, including a tweet from a certain Mr. Russell Crowe).

'Sing To The Moon' seems very much an old fashioned type of album that takes you on a journey through Laura's life, inspirations and influences. Many have already compared her to one of her musical heroes, NINA SIMONE. Whilst actually sounding nothing like her, there are elements of the legendary performer' style that are echoed in her sound. (Although her self confessed love for 90's R&B girl group ETERNAL is quite as obvious)

Predominately it is the voice that gets you and reels you in every time. Most of the self penned tracks starting gently, then building into a unique wall of sound that is both captivating and hypnotic. Many cuts are relatively sparse (for example the title track or opener 'Like The Morning Dew'), with instrumentation, much of it played by solely by Laura, kept to a minimum and incorporating large sections of acapella and layered choir vocals. What also cannot be overlooked is the African influence on her sound, an authenticity even PAUL SIMON could not hope to replicate.

Credit should also go to STEVE BROWN who co-wrote and produced the album (and who's track record with RUMER speaks for itself). His touch has clearly helped bring high quality production values to the project.

Having already seen most of the album performed live, it was interesting to see how some of these songs would transfer to their studio versions. Happily there is little difference. 'Sing To The Moon' is a captivating collection of songs instantly brighten your day.

Check out one of the album's highlights, captured live in London last year, the closing track 'Diamond'

'Sing To The Moon' is out now via RCA VICTOR

For more info on Laura go to : http://www.lauramvula.com/